The ticket sale for the Opening Night of IN-EDIT 2022 has started!

Come to this very special night and celebrate with us the start of the 4th edition of our beloved IN-EDIT International Music Documentary Film Festival of The Netherlands. We have a night full of 80s vibes and hits for you… so come with your best dance moves! With the screening of the film a-ha The Movie (2021, Thomas Robsahm & Aslaug Holm). The film shows what stardom did to the lives of Morten Harket, Magne Furuholmenen and Pål Waktaar-Savoy of the world-renowned Norwegian band a-ha, using strong archival material in combination with animation and unpolished stories from the artists themselves. This is a film about good music, great ambitions, broken friendships and – just maybe, even forgiveness.

Stay tuned for more surprises for this sparkling night!!

For now, make sure you get your ticket before they sell out! And be aware that you can watch the film at Melkweg and at Cincenter (and join the party afterwards)! The film will start a bit earlier at Cinecenter so that everyone has time to head up to the Upstairs room of Melkweg after the film and attend the Q&A and the Opening Party. 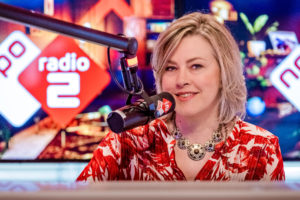 Simone Walraven is a radio- and podcastmaker for Dutch national public broadcaster AVROTROS. She began her career at age 15 as a newsreader and DJ at an Amsterdam pirate station and quickly moved into national public broadcasting after graduating high school. She learned all aspects of radio production and hosted various informative and music programs, including on television. She is most well known as the host of legendary tv-show Countdown in 1987/’88, for which she interviewed countless international popstars. She also made her debut as an actress in 1987 with the female lead in the romantic comedy Donna Donna. At age 22, after four years of intensive experience in the public eye, she decided to continue her career behind the scenes as an executive music producer and filmmaker. In 2013 Simone re-entered national public radio with her weekly music & human interest show Simone’s Songlines on NPO Radio 2 (photo credit to Ben Houdijk).