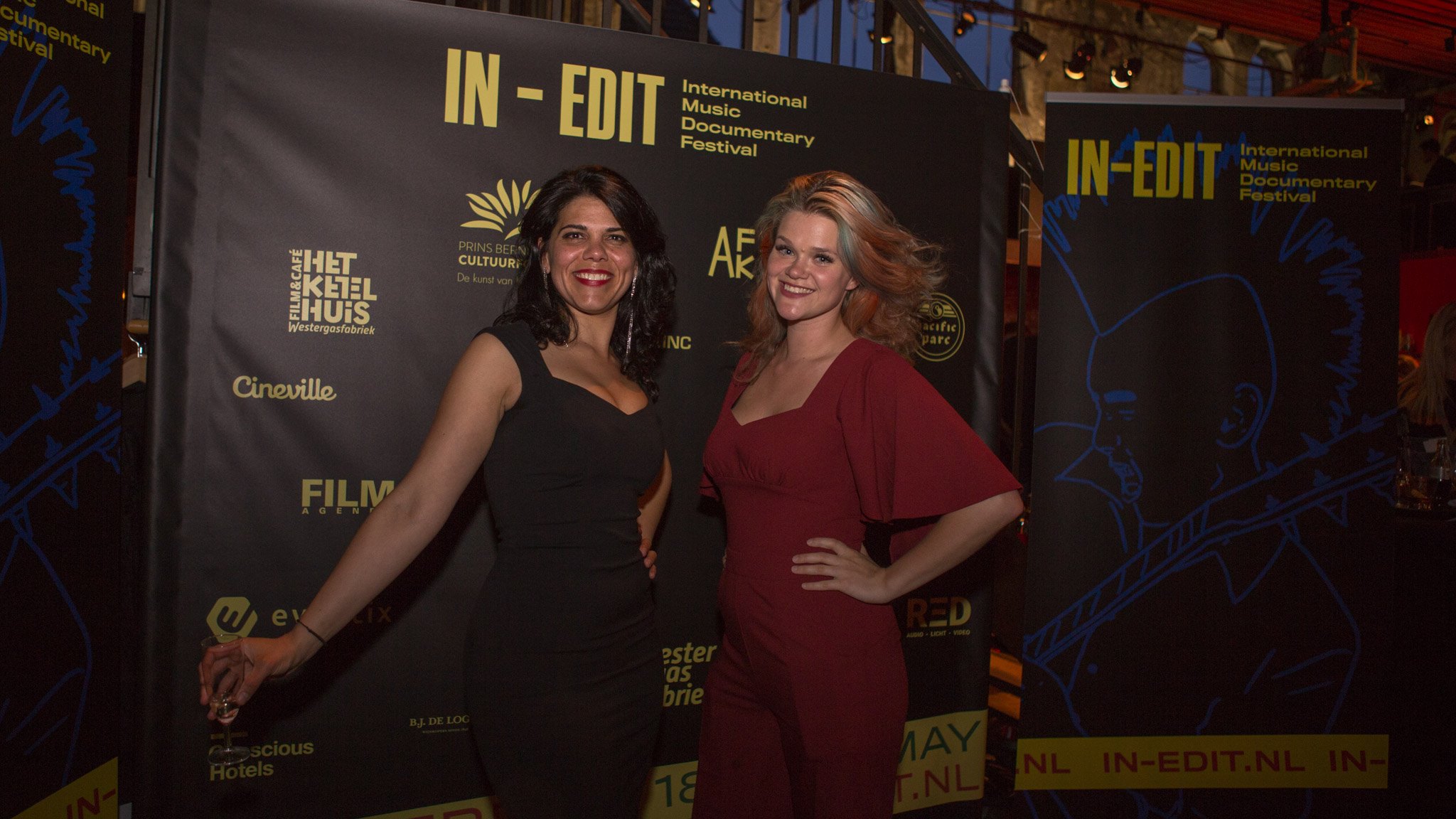 After a successful first edition, IN-EDIT is back again this year to please our ears, feast our eyes and warm our hearts with an international selection of music documentaries as well as live concerts, events and panel discussions.

IN-EDIT is a global festival that’s bringing together two of the most important ingredients of modern culture, music and cinema. As the 2nd edition of the festival is approaching, it’s time to enjoy a cup of coffee with the driving force behind it, director Carla Navarro and general manager Anna Chvartchenko. Are they going to reveal any of the surprises they got in store this year?

So, Anna and Carla, you’ve been working hard to bring this festival to life in the Netherlands for quite some years now. Could you first of all tell us about the idea behind IN-EDIT? What is it that makes it so special compared to other film festivals?

Carla: With the festival we wanted to ease the path of the music documentary genre to the big screen. It used to be complicated to reach a big audience for music docs and luckily now they are getting more and more attention. So it’s time to give this edgy genre a proper stage. And be a yearly meetingpoint where all the music lovers can get their brainfood!

Anna: Which makes us different from other filmfestivals, because we combine film AND music in a total experience. Every film has a music related side program, last year for example, we’ve showed a film about the metal scene made by new talents and had a metal band perform acoustically in the cinema room afterwards. That’s something you don’t see every day.

How did you make the decision to also bring it to Amsterdam? From your festival experiences, how do you find the audience here? Are people more interested in the music, the artist in question or the film?

Carla: I’ve been attending IN-EDIT in Barcelona every year from one of the first editions more than ten years ago. When I moved to Amsterdam, it struck me: I can’t go to IN-EDIT this year! But it also made me think: why isn’t it happening here actually? The Amsterdam atmosphere is perfect for this combination of film and music. And I met Anna, who was crazy as I was to bring the festival here, so that’s how we started four years ago.

Anna: From the start, we actually expected to reach a music loving audience mostly. And of course that happened! The films about punk attracts the punkies, the films about specific artists attracted the fanbase of those artists and so on. But last year we saw that the films also attracted a big general film loving audience. People who are interested in the story behind the music without being a die-hard fan of a specific genre. So we’re also just a festival that programs good quality content that is interesting for a broad range of people.

IN-Edit is mostly known among cinema-goers as a music documentary festival. What other events are we to expect?

Carla: As Anna mentioned, we aim to give the audience a total experience with our festival. Next to the music documentaries and live music, we have an industry program with panel discussions between directors, producers or other people from the music documentary field. But also speed lectures of innovative crossover projects between film and music, and this year we are organizing speed dates for musicians and filmmakers with experts in the field.

Anna: Next to that we have an educational program starting this year, a new talent stage for musicians, and we are looking into more quirky events like silent cinema screenings in more venues at the Westergasterrein. So, it’s going to be a full packed four days!

What was your favourite moment from last years IN-Edit? Personally, I will always remember the lovely ladies from the George Michael fanclub that queued outside the screening for David Austin’s “George Michael: Freedom!”.

Anna: Haha, yes! It was very exciting to have such a known person at our festival, we actually needed to make queues for all the people who wanted autographs and pictures!

Carla: Yes, that’s really one from our list of most fond memories of last year! But I also think that the opening night was one of the most satisfying moments of our lives! To see everything start, the festival rolling out of our hands into our team and seeing how much the audience enjoyed something that has been in our heads for a long time.

Anna: Definitely! I was so overwhelmed that people were finally experiencing something that we have thought about so much and worked so hard for. And actually liked it! I was in a high of life from that moment on throughout the whole festival!

Carla: Yes, the whole festival was my favourite moment!

What new things are you bringing for this year’s edition? Any hints for exciting surprises?

Carla: Well we already mentioned some new things from our program, but what’s also new is that we are working with an overall theme this year: shine on you, crazy diamonds!

Anna: We are putting a spotlight on all the creative people who do not fit the “normal” spectrum. People with autism, ADHD, schizophrenia, depression, etc. who make the most amazing music or films. So, we are focusing a lot on mental health this year and embracing your own ‘not-normalness’.

Carla: With this theme as a base, we’re bringing films and artists that will make you go bananas! 😉