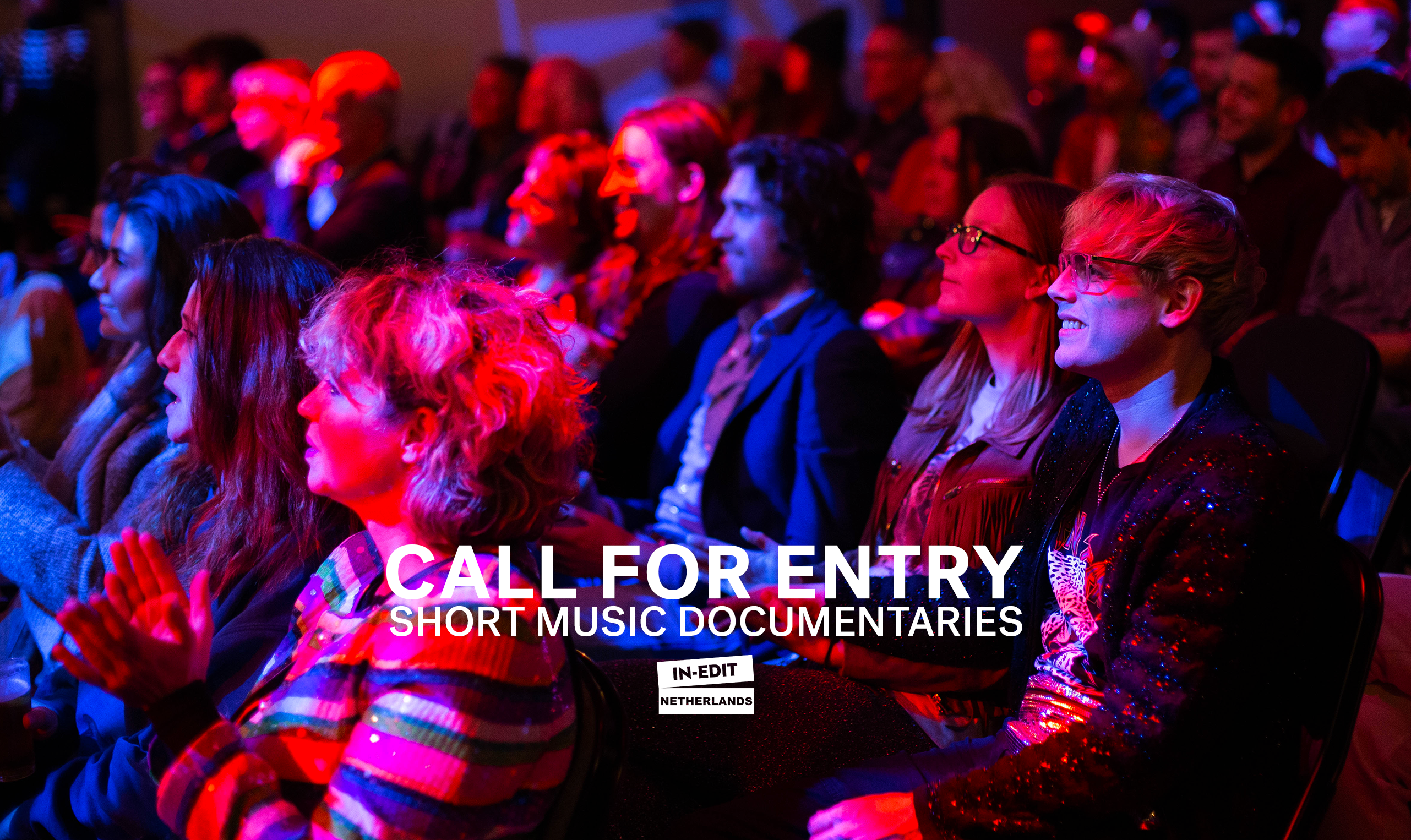 IN-EDIT Festival NL is the Netherlands’ edition of IN-EDIT, which counts with international and Dutch music documentaries. Next to the screening of the films, the festival has live performances by matching musicians, Q&A’s with artists and directors, and industry meetings arranged for and by professionals. Subscribe to our newsletter to stay up to date on IN-EDIT 2023.

Our 5th edition will take place in cinemas in Amsterdam from the 13th to the 23rd of April 2023 and throughout the Netherlands during May and June 2023. We now open the call for entries for IN-EDIT IN SHORT Audience Award Competition 2023 for short Dutch music documentary films.

Documentaries that fulfil the following criteria are eligible for IN-EDIT IN SHORT Audience Award Competition:

Films will not be eligible if:

*Films made by non-Dutch parties can be submitted via our headquarters’ website: www.in-edit.org.

If your short music documentary is selected, it will automatically compete in the IN-EDIT IN SHORT Audience Award Competition. There is no screening fee for competing films.

The deadline for submitting Dutch entries for IN-EDIT IN SHORT Audience Award Competition 2023 is 15th February 2023. You can register and submit your film via this link or button below.

SELECTION PROCESS AND COMMUNICATION OF THE DECISION

IN-EDIT Netherlands counts on a Selection Committee that carefully selects the film according to the quality, originality, urgency, uniqueness and artistic approach of the content, the subject, the story, or the perspective.

The Selection Committee’s decision will be communicated by email to the contact address provided in the registration form and will be final on the 28th of February, and this will be final. IN-EDIT NL will announce the selection on its channels from the 13th of March. We ask the film crews to refrain from communicating any information until the festival has made it public via its channels.

CONDITIONS AND FORMALIZATION OF PARTICIPATION

The Festival reserves the right to the official publication of the list of selected titles and will agree on the order and screening date of each documentary. The Festival commits to not screen each title more than three times during its physical dates (excluding possible prior press screenings and including possible ON TOUR screenings).

From the time of signing the participation agreement to the date of the closing of the Festival, the selected film must remain unscreened in the Netherlands or on any online platform. Furthermore, it may not be withdrawn from the Festival from the moment that the screening permission is signed, and the obligation will stand to provide the Festival with all materials required for the optimal screening of the film with sufficient notice.

The Festival reserves the right to refuse participation in any film that does not comply with the technical requisites for a high-quality screening.

The screening of the short documentaries’ selection will be without stop one after the other in one cinema slot of a maximum of two hours. Only one ticket is required.

At the end of the screening, the voting ballots will be collected and counted by the Festival crew, and the winner will be announced at the closing ceremony on Saturday, 22nd April.

The award for the winner of the IN-EDIT IN SHORT Audience Award Competition 2023 is direct access to the film program of IN-EDIT FESTIVAL in Barcelona. The winner will not have to undergo a selection process and will be directly selected to participate in the short documentary section of the largest edition of IN-EDIT, with more than 40.000 visitors every year that will take place in Barcelona in October 2023.