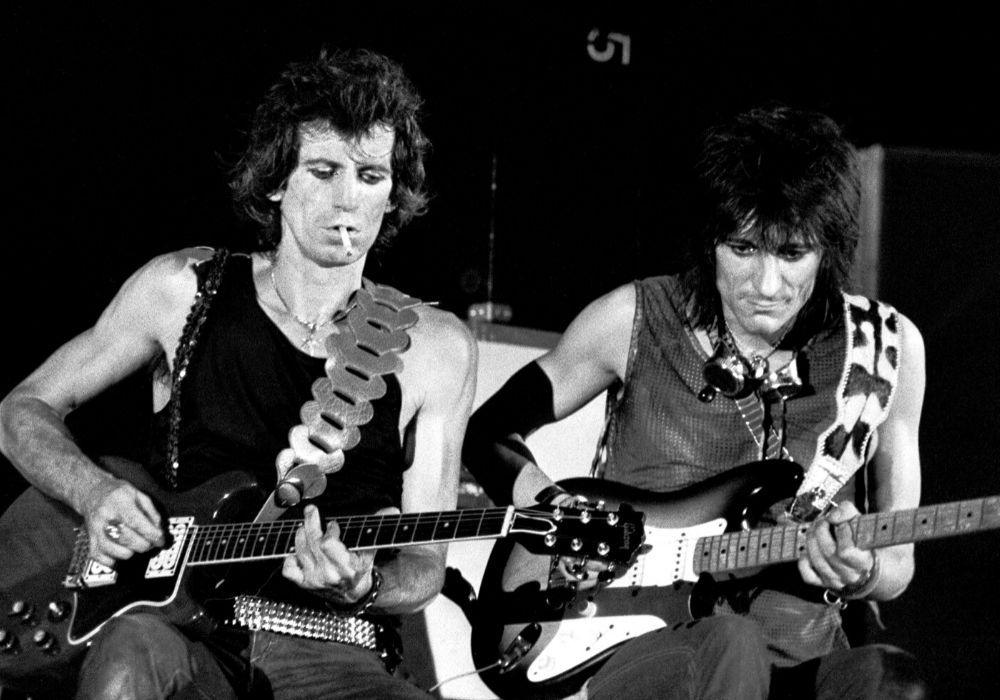 Mike Figgis’ documentary Ronnie Wood: Somebody Up There Likes Me follows one of Rock n’ Roll’s most prolific guitarists as an intimate story of  music and art.

On the cutting edge for over 5 decades, Ronnie Wood may best be known as one-half of one of the best guitar duos of all time (with, of course, Keith Richards as a member of The Rolling Stones). However, Wood’s extensive career has seen him a member of legendary groups like The Birds, Jeff Beck Group, The New Barbarians, Rod Stewart, and The Faces, carving out his distinct place in annals of Rock n’ Roll history along the way.

Slash & Izzy Stradlin (Guns N’ Roses)
The late 80/s/early 90s pretty much belonged to Guns N’ Roses. With its charismatic once in a generation vocalist to its legendary tales of debauchery Guns N’ Roses is one of those trash metal bands that sit atop the pinnacle of an era. It’s guitar duo of Slash & Izzy Stradlin, not only complemented each other, creating the essence of the Guns N’ Roses sound but also oozed cool from every corner of the stage. The top hat-wearing, sunglassed, party animals were the heir apparent to The Rolling Stones lead/rhythm dynamic. This sound is (in my opinion) best experienced via ‘Appetite for Destruction’ on the likes of ‘Mr. Brownstone’ and ‘Paradise City’, but the more symphonic elements of ‘Use Your Illusion 1+2’ also provide ample space for the Slash/Izzy machine to shine.

James Hetfield & Kirk Hammett (Metallica)
Maybe more a singer and guitarist duo, it is undeniable that the thrash metal of Metallica would not be where it is today without the guitar work of Kirk Hammett and James Hetfield. Listening to Hetfield’s rhythm work, one would be hard-pressed to think of more complicated riffs for many a singer/guitarist, while Hammett is nothing short of a metal guitar god. On virtually every track, the combination of Hammett and Hetfield shines through with the likes of ‘One’, ‘Fade to Black’, and ‘Master of Puppets’ prime examples.

Stone Gossard & Mike McCready (Pearl Jam)
The seminal staple of the Seattle grunge era Pearl Jam is one of those rare bands that have stood the test of time, pushing through the angst-driven sound of the era and evolving into something timeless. Though much attention is reserved for lead singer Eddie Vedder, Pearl Jam’s one-two guitar punch of Stone Gossard and Mike McCready play as strong a role in the band’s success and sound. Blurring the lines between lead & rhythm, Gossard and McCready juxtapose the traditional distorted electric of the former with the clean, blues-inspired riffs of the former, into something instantly recognizable.

Jonny Greenwood & Ed O’Brien (Radiohead)
Though very different, the guitar duo for Radiohead has perhaps the most symbiotic relationship of any on this list. Greenwood’s more traditional guitar showcase combines with O’Brien’s experimental penchant into the sound of a defining 21st Century band. Greenwood’s sound is best heard on the likes of ‘Paranoid Android’ and ‘Creep’, while O’Brien’s experimentalism can be felt on ‘2 + 2 = 5’ and ‘Lucky’