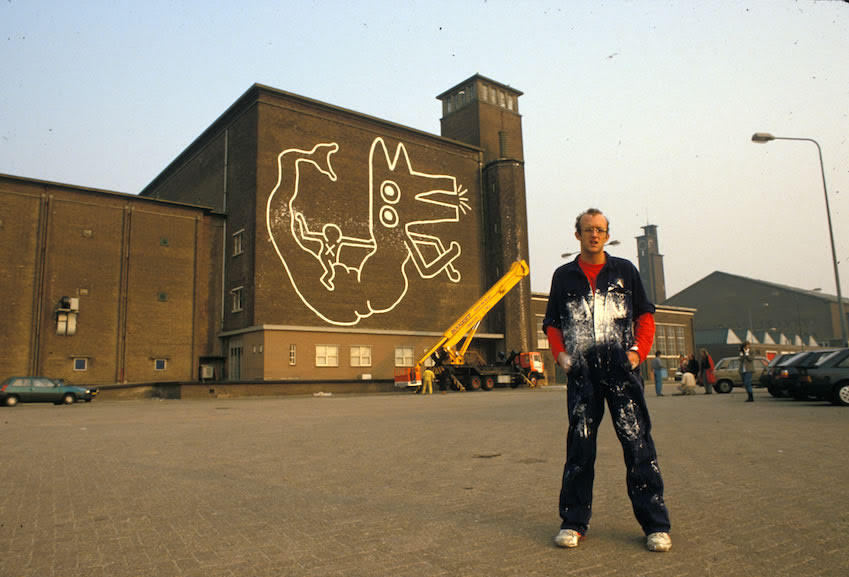 Infamous for his graffiti styled pop art, Keith Haring’s iconic style comprised of silhouetted figures using solid, bold lines and vibrant colours that saw him blur “high” and “low” art. Haring had a unique ability to simultaneously attract a mass audience while spreading awareness for a variety of social causes, using a visual language that was accessible to all.

Born in Pennsylvania in 1958, Haring eventually moved to New York in 1978 to study painting at the School of Visual Arts, having dropped out of Pittsburgh’s Ivy School of Professional Art earlier that year. It was here in New York that Haring began experimenting with his art and attracting public attention, creating white chalk drawings on unused black advertisement boards in subway stations across the city. This innovative method saw Haring receive great recognition for his art and affirmed his long-standing belief that not only does “the public have a right to art” (Haring) but the public “is being ignored by most contemporary artists” (Haring).

Haring was one of few artists that managed to gather a lot of recognition early on in his career, with the likes of Andy Warhol and Jean Michel Basquiat being big fans of Haring’s works. Friendships with such artists led to Haring developing a strong connection with the celebrity elites, collaborating with the likes of Madonna and Grace Jones. Despite Haring’s rapid success and climb to fame he remained adamant that “art is for everybody” (Haring), which led to him opening his Pop Shop in Soho New York in 1986, commercializing his work and making it accessible to the public while simultaneously breaking down barriers between “high” and “low” art. The arrival of Haring’s Pop Shop saw a shift in his work reflecting stronger socio-political themes including: anti-apartheid, the crack cocaine epidemic and especially AIDS awareness, as Haring was an openly gay man who saw it vital to reduce the stigma of AIDS and encourage safer sex.

From 1982 onwards, Haring developed a strong international presence within the art world. Not only was Haring’s work being featured in various exhibitions, he was also being commissioned to create murals across various cities. Most notably in 1986, Haring produced an iconic mural on the Berlin Wall, after being asked by the Checkpoint Charlie Museum, a piece symbolising hope for unity between East and West Germany. In the same year Haring had his first solo exhibition here in Amsterdam at the Stedelijk Museum.

Haring also produced one of his trademark murals on the outside of the Stedelijk’s former storage facility that was only uncovered in 2018, after spending almost three decades behind insulation panels. I would definitely recommend taking a trip to Centrale Markt in the west of Amsterdam to check out Haring’s work. This 40-foot mural shows a hybrid creature – part dog, part fish – being ridden by one of Haring’s signature figures, again reflecting the artist’s belief that it is the “viewer that creates the reality, the meaning, and the conception of the piece” (Haring), as he always resisted from attaching a fixed and absolute meaning to his art pieces.

Sadly Haring’s impressive career was cut short due to AIDS-related complications in 1990, but his legacy still lives on with the Keith Haring Foundation still working to combat AIDS and the various effects it has. In June 2019, Haring was inducted on the National LGBTQ Wall of Honour within the Stonewall National Monument as one of the fifty American “pioneers, trailblazers, and heroes”, signifying the importance of such a cultural icon and that his work still remains relevant to this current day.

*At IN-EDIT 2020 this May you’ll get the chance to watch Keith Haring’s passage through Barcelona, in the 2019 documentary “Keith Haring 1989 Barcelona” directed by Lulu Martorell, Roger La Puente and César de Melero. Watch the trailer below.