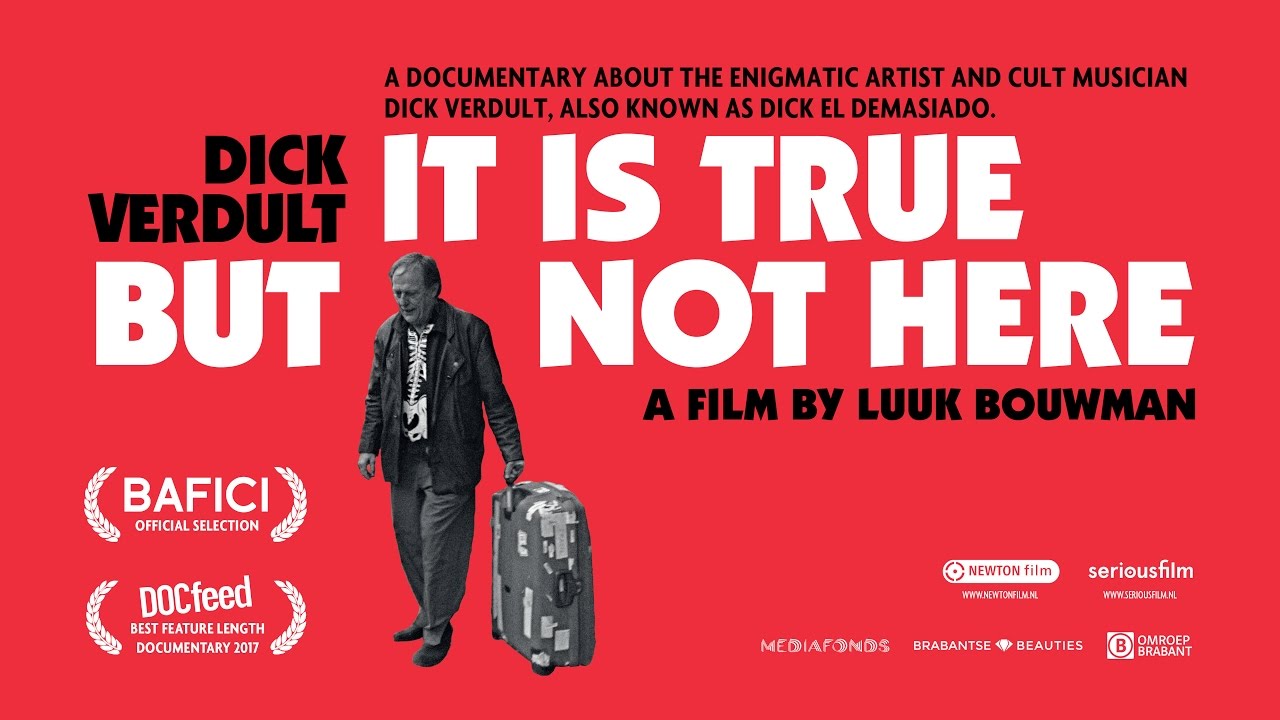 The career of Eindhoven-based artist and musician Dick Verdult spans decades. He is seen as ‘the last Dada-ist’. But what we experience as elusiveness turns out to be quite controlled and funded on experiences from his childhood as a ‘Philips child’ in Latin America. We see how, at the age of 60, he has become a cult musician in South America, Russia and Japan and is increasingly recognized internationally as a visual artist.

Hoi Dick thank you for joining us today! We’d like to firstly ask, what drew you to the music ‘cumbia’, how were you introduced to it and what was so appealing about this type of genre to you?

As a Dutch boy I was raised in Latin America in the early 60’s. Urban Argentina was very complexed in the sense that it felt and wanted to feel very European. Therefore, all culture was European and more so, an imitation of being ‘European’. Their ‘Elvis’ was a blond-dyed hair with an Italian surname, a weak accompanying band worn-out session-musicians and Spanish stupid lyrics, etc. All my more (or less well-to-do friends) believed in it. But being from the outside I could recognize the insincerity of the attempts, the fake. Not so however, from the music and the culture of the woman who worked in our house… She was from the inner-lands of Argentina and cumbia music would come out from her room. Since I assimilated her kindness, her honesty and humility with that music, I always had a weak spot for it. Then, much later, being an adept dub music-scholar (I sponge-absorbed Jah Shaka, Lee Perry, Scientist and Rico) I sensed vicinity of cumbia with dub, and got out to experiment with it, which was in 2000.

Musically, I like the rhythm which has a friendly dancefulness, unlike salsa which is more about being ecstatic and self-centered.

Very interesting! Why is your artist name more widely known as ‘Dick El Demasiado’? Is there a meaning behind this name?

It firstly accentuates exaggeration, because yes, I go in to overdrive: as much as my texts, or the distortion involved. So Demasiado means ‘over-sized / over-the-hill’ but it also refers as to someone who is ‘too much’, in the sense he doesn’t fit anymore (in a life-boat, in an elevator, etc). It is wishful to dispose of him. And finally, Demasiado works fine because if they (organisers) have invited me, they cannot complain, I am too much afterwards. I carry the name as a musician, but not as a sculptor, writer or filmmaker.

Makes sense. Now onto the film that is being shown about you, ‘Dick Verdult – It is True but not Here’, did you feel that it managed to capture the essence of your art as a musician and artist?

The film is wonderful, really wonderful, because it is easy, it has no “intellectual upgrading selling effort”. It is a portrait not only of me, but of the phenomenon of distorting within the clash of cultures, and doing this with complicity of others, enjoying it and getting excited of what arises from it. It is a perfect example of an organic meeting in the world of diversity. As far as my art, which is a continuous process and not very object-oriented, there could be made three other films of equal length. Whole chapters aren’t included. This has to do with the limits of the audience capacities, *laughs. If you show to much stuff that is not easy to categorize people tend to lose the tension. For Luuk Bouwman (the Director) it was more important, and rightly so, to catch me as a happy executioner of distortion on the act, whilst making it contagious for those who see it.

The film touches upon themes of xenophobia and cultural differences, in what ways have you felt affected by this, if any?

Well, I have moved (or rather been moved) 20 times in my first 20 years. Not only moving from house to house, but also from country to country, even languages and hemispheres.  So, through experience I can say I am a specialist in adapting to new perspectives, playing with it and evaluating whether I want to associate with the new context or not. This is a big gamma of questioning that few have to do so often and so young. I am very aware these processes can destroy you! But if they haven’t succeeded, the world is a big feast and every person a treasure of surprises. I feel so privileged I went through that and have had the circumstances and ability to give that cultural rollercoaster a drastic twist.

Thanks so much Dick! We can’t wait to see the film on Friday and your performance! Looking forward!